Welcome! This is the project website of our paper:

We present modality gap, an intriguing geometric phenomenon of the representation space of multi-modal models. Specifically, we show that different data modalities (e.g. images and text) are embedded at arm’s length in their shared representation in multi-modal models such as CLIP. Our systematic analysis demonstrates that this gap is caused by a combination of model initialization and contrastive learning optimization. In model initialization, we show empirically and theoretically that the representation of a common deep neural network is restricted to a narrow cone. As a consequence, in a multi-modal model with two encoders, the representations of the two modalities are clearly apart when the model is initialized. During optimization, contrastive learning keeps the different modalities separate by a certain distance, which is influenced by the temperature parameter in the loss function. Our experiments further demonstrate that varying the modality gap distance has a significant impact in improving the model’s downstream zero-shot classification performance and fairness.

TL;DR: We present modality gap, an intriguing geometric phenomenon of the representation space of multi-modal models. 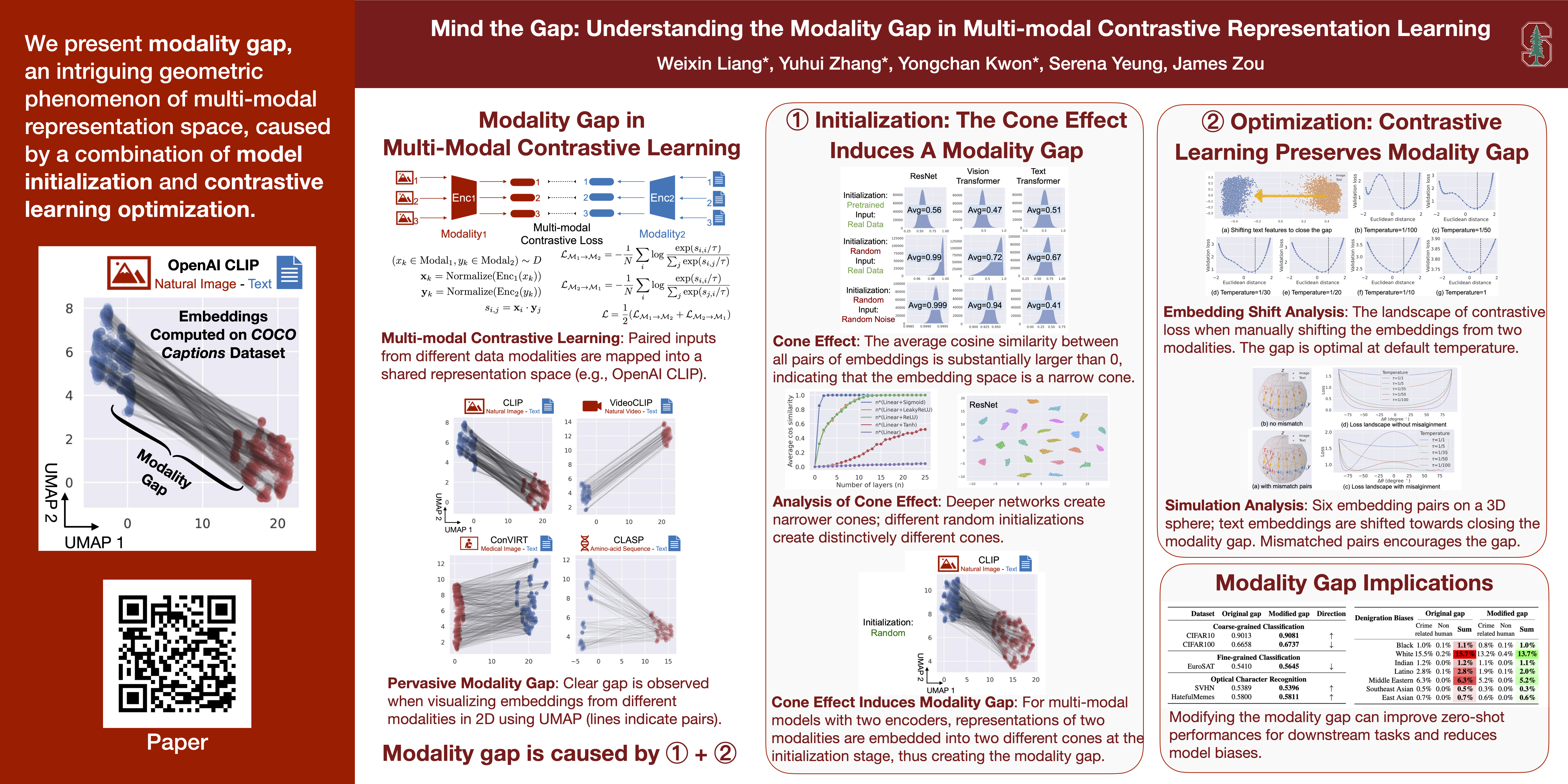 How do we explain Modality Gap? A three-part explanationn.

The cosine similarity between all pairs of embeddings (last-layer feature)

The average cosine similarity is substantially larger than 0, indicating that the embedding space is a narrow cone. The cone effect also holds on randomly initialized models, and on random noise inputs.

Effects of nonlinear activation and depth.

We randomly initialized a model 25 times, and plotted its extracted embeddings on the same real data via UMAP visualization. We found that each random initialization forms a distinctively different cone. Since a multi-modal model consists of two encoders, which creates different cones at random ini- tialization, this explains how the modality gap is present at initialization.

We hypothesize that the contrastive learning objective encourages the existence of the modality gap. To testify this hypothesis, we manually shift CLIP’s image embeddings and text embeddings towards closing the gap.

We found that under CLIP’s default temperature \(\tau=\frac{1}{100}\), the default gap distance \(\| \vec{\Delta}_\text{gap} \|=0.82\) actually achieves the global minimum, and shifting toward closing the gap increases the contrastive loss.

However, when the temperature increases (Figure 3 (c,d)), the repulsive structure and the local minimum gradually disappear, and closing the gap becomes more optimal.

Together, these results show that contrastive learning keeps the different modalities separate by a certain distance, which is influenced by the temperature parameter in the loss function.

One of the most interesting capabilities for CLIP is its strong zero-shot transferability to a variety of downstream tasks without any supervision. We found that modifying the modality gap can improve zeroshot performances on multiple downstream tasks.

We found that increasing the gap from \(0.82\) to \(0.97\) reduces denigration harms consistently for all races. Meanwhile, we only observe a minor \(0.0008\) top-1 accuracy drop. It is encouraging that a simple gap offsetting approach can lead to a consistent bias reduction across all races on such a complex model (i.e., CLIP).

If you use this repo in your research, please cite it as follows (Under Submission). :